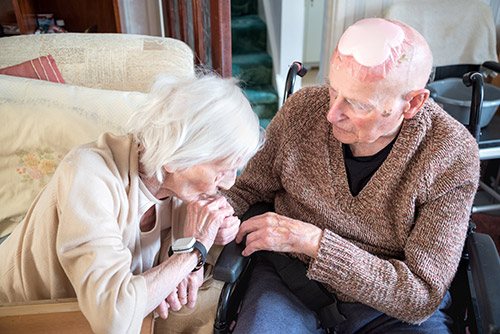 Welcome back to our blog page for our Winder-area assisted living and our Winder memory care community. No matter what stage of care need your elderly loved one is at, you can trust that you have proven professionals right around the corner here at Gateway Gardens Assisted Living & Memory Care to deliver genuine quality of life improvement to you both. Today, we feel it is important to educate you on the differences between Alzheimer’s and dementia. They are related but clearly unique subjects.

Many people outside of healthcare mistakenly confuse dementia with Alzheimer’s, yet the two are very different conditions. While both can affect memory, there are clear distinctions. What follows is a look at what these differences can mean for patient symptoms, long-term outlook, and patient memory care need.

The confusion many people have between Alzheimer’s and dementia is understandable, as Alzheimer’s is both the most common cause of dementia and one (but not the only) form of dementia. Dementia is the name for a group of brain disorders that make it hard to remember, think clearly, make decisions, or control one’s emotions. Dementia is not a normal part of aging. It is caused by damage to brain cells that affects thinking, behavior, and feelings.

While Alzheimer’s makes up an estimated 60 to 80 percent of overall dementia cases, it’s not the only form of dementia. Alzheimer’s is a specific disease, while dementia is not. There are many other forms of dementia with different causes. The symptoms for those forms of dementia may or may not overlap with the symptoms of Alzheimer’s. For example, vascular dementia is typically caused by a stroke. While later symptoms often include memory problems, initial symptoms are more likely to include things such as poor judgment and trouble planning. Dementia With Lewy bodies (DWB) occurs when Lewy bodies — microscopic protein deposits in the brain—form and impair cognitive function. Along with the memory loss and decision-making challenges found in Alzheimer’s and vascular dementia, DWB can also cause hallucinations, daytime sleepiness, and physical movement issues, such as trembling or slowness. Those suffering from Parkinson’s disease have a 50 to 80 percent chance of developing Parkinson’s disease dementia, which is similar to DWB.

Why are facts about Alzheimer’s AND dementia important? Memory care involves taking steps to mitigate the impacts of dementia in patients as possible. While some forms of dementia have the potential to be reversed if identified early enough, there is currently no cure or reversal available for Alzheimer’s specifically. Memory care therefore often involves cognitive exercises to help slow the progression of dementia or at least help patients better cope with its impacts.

We understand these are difficult and frightening subjects to consider. With that said, here at Winder's Gateway Gardens Assisted Living and Memory Care, we are highly trained and skilled subject matter experts on the two subjects. And we can help you whether you are a resident, resident family member, or a non-associated care giver simply doing their best to serve another. We salute you and want you to know that we are always open and ready to talk.